Evidence based practice in neurofeedback 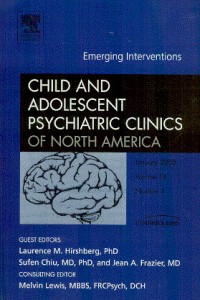 At the NeuroDevelopment Center, we follow neuroscience and neurofeedback research very carefully. We rely on this research to guide us in doing neurofeedback. In our hands, neurofeedback is evidence based practice. The National Institutes of Health and the American Psychological Association (APA) strongly advocate systematic reliance on research to guide treatment decisions. According to the APA, “Evidence based practice in psychology is the integration of the best available research with clinical expertise in the context of patient characteristics, culture, and preferences.” Below we summarize the neurofeedback research for many conditions. We also note when we believe its use is warranted. When we sit down and talk about your challenges and your goals, we will inform you about the neurofeedback research related to your condition. We will provide you with the studies if you like. We want to make sure you have that you have the all the information you need to make a well informed decision.

There is a solid body of research showing that neurofeedback is an effective treatment for ADHD and ADD. A statistical study of all the existing neurofeedback research was published in a neurology journal in 2010. At that time, more than 10 controlled studies had been completed.  The results showed a significant benefit of neurofeedback for attention, impulsivity, and hyperactivity when compared to control groups who received computerized attention exercises, group therapy, muscle activity biofeedback, and being placed on a wait list. Follow up studies indicate that these improvements are lasting.

Attention deficit disorder is associated with decreased activity in attention networks in the brain, especially in the front part of the brain – the frontal lobe. Several studies have shown increased frontal lobe activity after neurofeedback, documenting that neurofeedback is addressing the core problem in ADHD, not just temporarily reducing the symptoms. At the NeuroDevelopment Center, we recommended neurofeedback when:

Neurofeedback is often especially helpful with the difficulties with frustration, irritability, anger, anxiety, and mood that very often accompany ADHD.

Research on the effectiveness of neurofeedback for attachment disorders is in the very early stages. One small uncontrolled study of children diagnosed with reactive attachment disorder showed significant improvements emotional and behavioral functioning after 20 sessions.

At the NeuroDevelopment Center, we have found that neurofeedback is consistently helpful with the kind of difficulties with emotional regulation that kids with attachment disorders show. Neurofeedback has helped these kids feel calmer, more balanced emotionally, more readily able to handle the conflicts, difficulties, and stresses of everyday life. Emotions much less often rocket out of control. Our treatment outcome research shows this.

Early studies have provided some research support for neurofeedback as a treatment of the symptoms of autism spectrum disorders (ASD) including Autism, Asperger’s Disorder, and Pervasive Developmental Disorder (PDD). As of 2011, nine controlled studies have been completed, showing significant improvements in social, emotional, and behavioral functioning with neurofeedback. Seven studies showed brain change after neurofeedback. Follow-up studies at 12 and 18 months after the neurofeedback training ended have showed that the gains from neurofeedback last after training ends.

Treatment for ASD is expected to be long term. But these studies are showing improvements in a very short time – between 10 and 18 weeks. More research needs to be done, particularly more studies employing random assignment of subjects to a neurofeedback and to a good comparison or control group.

At the NeuroDevelopmentCenter, we believe that the early scientific evidence suggests that neurofeedback should be considered an evidence based treatment option to supplement better studied treatment such as applied behavior analysis and speech and language therapy.

Research is in the very early stages for studying the effectiveness of neurofeedback for bipolar disorder in children and adults. Initial case series, presented at scientific meetings, suggest that it can be helpful along with medication and other forms of treatment. This has also been our experience, and that of other neurofeedback treatment centers, with clients with bipolar disorder.

Because of the lack of controlled scientific research, we recommend considering neurofeedback as an option when better researched treatments have been employed and found wanting, either because symptoms remain or side effects are severe. Many patients with bipolar disorder have difficulty with very long term use of medications, even when they are helpful with stabilizing mood. Adding neurofeedback treatment has helped many to feel more stable with less medication. In some instances it is possible to reduce the amount of medication needed. Rarely, but occasionally, individuals with bipolar disorder have been able to get off medication entirely and remain stable, after a long course of neurofeedback.

Five small group studies have been completed investigating the effectiveness of neurofeedback to address the symptoms of traumatic brain injury (TBI). A number of case studies have also been reported. These results, although only preliminary, suggest that neurofeedback is a promising intervention for impairments of short and long term memory, attention, and problem solving deficits resulting from closed head injury. Several studies showed that neurofeedback results in greater improvement in function that other forms of rehabilitation, including computerized exercises, use of strategies, and medication.

We know what happens in normal aging to the EEG: overall power is reduced and the brain’s idle speed or sampling rate slows. Research has shown several EEG markers for Alzheimer’s disease, other types of dementia, and other forms of age related cognitive decline. In one study, these markers were seen up to 10 years before any symptoms were evident.

This well established finding in neuroscience can be directly applied in the treatment of mood problems with neurofeedback. Three controlled studies showed that mood was improved in college students when the left front side of the brain was trained to be more active than the right using neurofeedback. One study showed that patterns of thinking also changed, with a reduction in ways of thinking that have been associated with depression.

Several early studies have been completed with depressed adults showing significant improvements in mood with neurofeedback. At the Neurodevelopment Center, we believe that this early research supports use of neurofeedback for depression when better studied methods such as medication or psychotherapy fail or result in only partial improvement. If you are depressed and neither anti-depressant medication nor psychotherapy has eliminated your symptoms, the existing research suggests that neurofeedback may be helpful.

At the NeuroDevelopmentCenter, we have worked with many children and adolescent clients with learning difficulties and have consistently found it to be helpful. We will recommend neurofeedback when other forms of remediation like tutoring and specialized learning programs have been employed and difficulties continue. Neurofeedback is often especially helpful with the difficulties with frustration, irritability, anger, anxiety, and mood that very often accompany learning disabilities.

Research is in the very early stages for studying the effectiveness of neurofeedback for migraines. Two open trial studies have been done. The results show that neurofeedback can help reduce the severity and frequency of migraine headaches. More and better research is needed.

Multiple studies of have been done of the effectiveness of HRV biofeedback for migraines. Overall, this research has shown that HRV biofeedback is also helpful in reducing the severity and frequency of migraine headaches.

At the NeuroDevelopment Center, we recommend biofeedback for migraines when medical treatment fails or does not help enough.

If you continue to suffer from the symptoms of PTSD despite treatment with medication and or psychotherapy, the initial research suggests that you consider neurofeedback.

Our research on neurofeedback

We measure treatment outcome with every neurofeedback client. We use well-established psychological tests to measure the severity of each client’s symptoms before and after twenty neurofeedback sessions. Because of this systematic approach, we have lots of data to document how helpful neurofeedback is on average.  So far we have conducted two reviews of these data in what would be called a retrospective uncontrolled or open trial study. Because it is possible that many factors other than neurofeedback may have accounted for the changes measured, it is important to understand the limitations of these results.

We analyzed data from 45 clients diagnosed with an autism spectrum disorder who were seen for neurofeedback over a three year period at the NeuroDevelopment Center.  Parents completed a well validated measure of social functioning called The Social Responsiveness Scale before and after 20 sessions. In the graph below, you can see substantial improvement in social functioning. All changes are statistically significant. The amount of change on the “Total” or overall measure score is considered a large effect size. 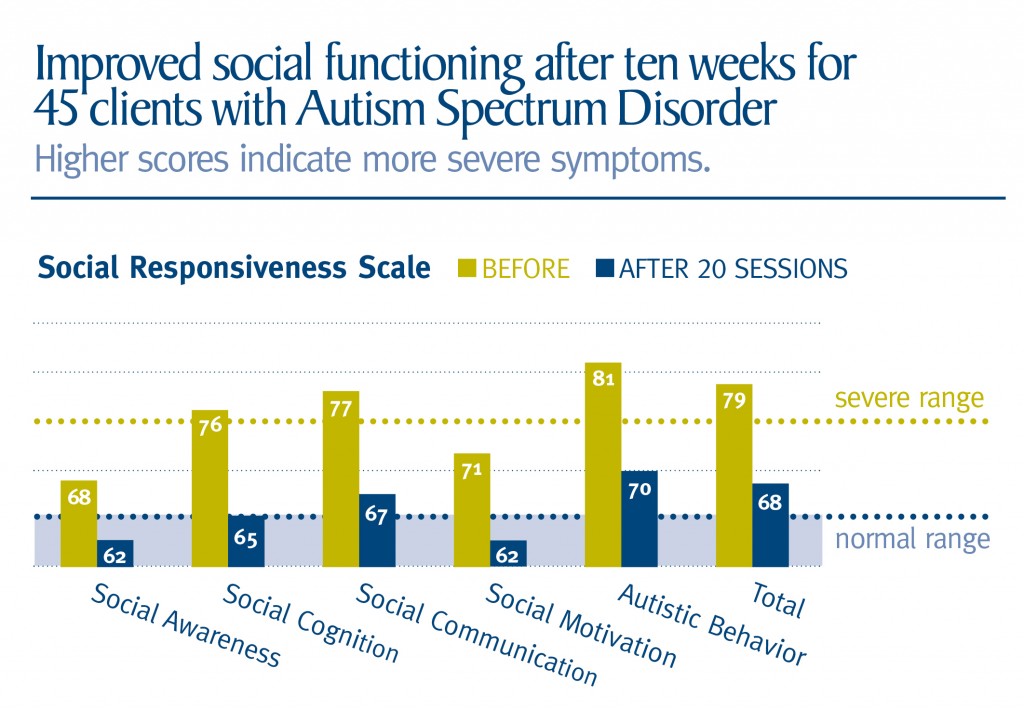 Emotional and behavioral self control

We analyzed data from 103 clients who had significant problems with behavioral and emotional self control. These problems were described by their parents and clearly shown by their abnormal scores on a well established measure – The Behavior Rating Inventory of Executive Function. This group included clients with diagnoses of ADHD, autism spectrum disorder, brain injury, anxiety, bipolar disorder, and attachment disorders. What was common to all clients was severe difficulties in regulating their behavior and emotional responses. In the graph below, you can see substantial improvements in self control on all scales. All changes are statistically significant. The amount of change on the “Behavioral Regulation” score is considered a large effect size.

Early published research shows preliminary evidence of the efficacy of neurofeedback for the symptoms of Post Traumatic Stress Disorder (PTSD). This research was conducted with Vietnam war veterans. At the NeuroDevelopment Center, we have worked with a new generation of veterans, some of whom who have returned from the combat in Iraq and Afghanistan with PTSD. To date we have worked with five vets. Although the number is too small to allow for statistical analysis, we have measured improvement in several areas of functioning after 20 sessions of neurofeedback. Using the Hopkins Symptom Checklist, a well established measure for adults, severity of many symptoms was cut approximately in half. The results are presented in the graph below: 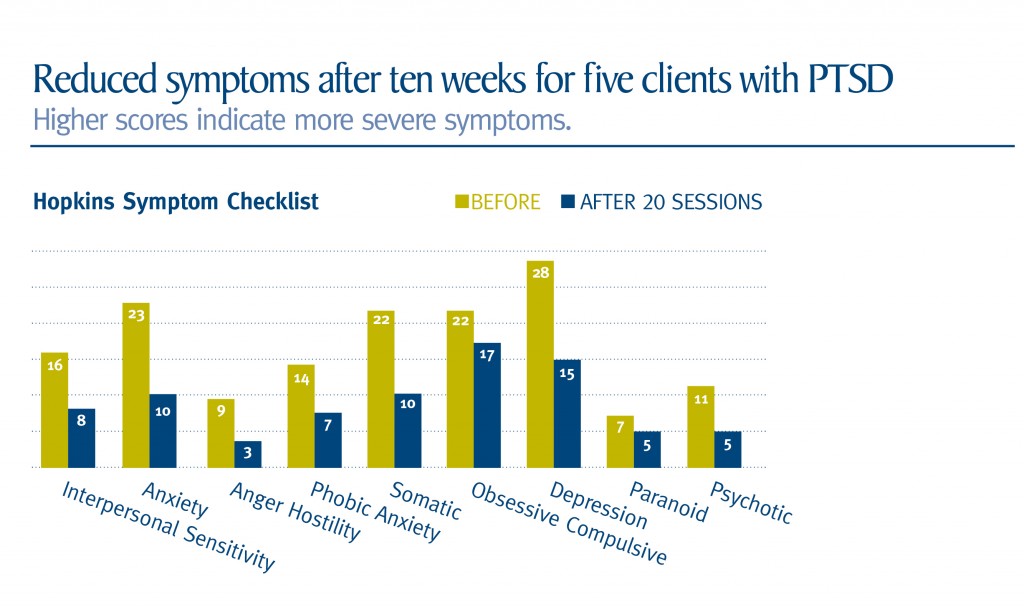 It is important to us that you make a careful and well-informed decision about whether neurofeedback is right for you. We have provided very general summaries of the research here. We have noted the situations when we think neurofeedback is worth considering. But we are more than happy to send our prospective clients any research papers in electronic form.  Just let us know during your initial visit what area of neurofeedback research you want to learn more about. We will send you the most important studies. (Sorry but we are only able to provide this service to clients seen in our centers.)

Neurofeedback has been approved by the FDA for relaxation.

Neurofeedback is non-invasive, painless, and safe. Numerous studies have been done evaluating neurofeedback. None have reported lasting adverse effects. Like any effective treatment, there can be short-lived side effects with neurofeedback. Effects such as difficulty falling asleep, inattention, irritability, sadness, restlessness, and headaches have been reported. However, these effects are usually gone the next day, and it is almost always possible to make adjustments in how the training is done so that they do not recur.

It makes sense that neurofeedback is safe when we remember that the process is simply one of learning or training. When you are doing neurofeedback, you are just seeing your own brain activity and getting hints when it is headed in the direction of improved functioning.