Meet Francine: Plagued by unaccountable moods for all of her adult life

Francine came to the NeuroDevelopment Center at the age of 58. Severe mood symptoms had plagued her since the age of 15. She managed to struggle through life despite her emotional ups and downs.  She had sought treatment many times.  She made multiple attempts at psychotherapy. She had been on many medications in many combinations. All this treatment but little improvement.

Francine responded beautifully to neurofeedback for bipolar disorder treatment.  Her mood improved and stabilized.  She felt great and stayed active. Her marriage improved and she became more socially active.  At one year follow-up, she summarized her experience with neurofeedback for bipolar treatment this way: My manic-depression has disappeared. From January to the present I have had 9 fantastic month. I eat properly. (I lost 11 lbs in 14 weeks.)  I sleep well. I have energy and I want to go out as much as possible and enjoy life to the fullest.” — F.D., Newport, RI

It is now seven years later. Francine  updates us periodically. She continues to thrive. 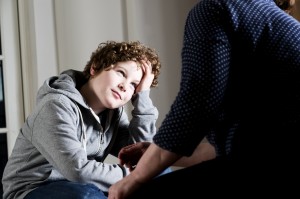 Paul and his family had struggled for years with his unpredictable moods and very difficult behavior. He had tried many medications and counseling multiple times. His Mom brought him for neurofeedback for bipolar disorder treatment. Paul did well with neurofeedback. No one can tell his story better than his Mom:

“My son P had been having difficulty at home and school managing throughout the day, struggling with social interactions, and staying focused at school. We had tried many things including 5-6 different medications, none of which helped. Most made him more agitated, aggressive, angry and less able to focus. The last straw was when he asked me to kill him because his life was way too hard. He is only 7. This brought me to seek alternate routes of treatment, thus The NeuroDevelopment Center.

The results with neurofeedback training have been amazing. He now looks at the world in a totally different perspective. The glass is now half full, not empty. He is able to handle frustrations and challenges without getting angry and aggressive. His social situations have also become much easier for him to negotiate. He no longer feels the need to be in control of everything the group is doing. He is now willing to put his ideas on hold, and follow through with what others want to do. His laughter is one of the most beautiful sounds and something we rarely heard. We and he discovered he has a good sense of humor.

Neurofeedback has certainly had a huge impact on our family and hopefully on the outlook he has for his future. The fears/anxieties that he still has at least now he can verbalize, and we can discuss them openly. We now have some idea as to what he is thinking/feeling.”
— S.F., Attleboro, MA