Here’s the good news: while medication provides temporary relief from the symptoms of ADHD and ADD, when you use neurofeedback for ADHD, you get to the root of the problem by training the brain’s attention networks to function better. We know from many studies that the brain is capable of enormous change and reorganization through practice. Neurofeedback provides massive practice to strengthen attention networks so that you can sustain attention, without medication.  Neurofeedback for ADHD is a natural treatment without medication. 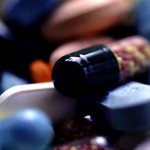 Medication is the most common form of ADHD treatment. They help many people with ADHD or ADD. But often symptoms remain despite medication. Some people have lasting negative side effects. Some do not benefit at all.  Even when medications help, they do not solve the core problem in ADHD – reduced activity in the brain’s attention networks. That is why people with attention deficit disorder may need to continue to take the medications every day, probably for the rest of their lives.  But most people do not continue medication long term. More than 75% of teens refuse to take their medication.  Sadly, adolescence is the time when they need help the most: Academic demands increase. Risks from impulsivity grow dramatically. Impulsive aggression at recess is one thing: poor impulse control while driving or dating is a much more serious risk.  Many choose neurofeedback for ADHD because it is natural, medication free treatment. 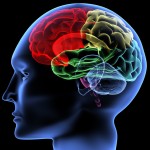 The strongest area of research on neurofeedback is on ADHD or ADD. A statistical study of all the existing research was published in a neurology journal in 2010. At that time, more than 10 controlled studies had been completed. The results showed a significant benefit of neurofeedback as an ADHD treatment for attention, impulsivity, and hyperactivity when compared to control groups.

Attention deficit disorder is associated with decreased activity in attention networks in the brain responsible, especially in the front part of the brain – the frontal lobe. Several studies have shown increased frontal lobe activity after neurofeedback, documenting that neurofeedback is addressing the core problem in ADHD, not just temporarily reducing the symptoms. Learn more about neurofeedback ADHD treatment

At the NeuroDevelopment Center, we are not satisfied with “maybes”. We want to know if neurofeedback is helping.  We want you to be able to see your improvement clearly, in black and white.  So we measure treatment outcome with every neurofeedback client. Prior to starting neurofeedback, we measure the severity of your ADHD symptoms using well established psychological tests. These same tests are repeated after every twenty sessions and the results compared to the baseline scores. So you will know if neurofeedback helped: you will see it in black and white. In many of the Real Stories below, you’ll see the results of our treatment outcome measurement.

Meet Brad: A teen struggling with ADHD despite meds

Brad was in his junior year of high school when he came to us. Although he had been taking stimulant medication for several years, he continued to show inattention and impulsivity, as well as organizational problems and weaknesses in executive function. The stimulant medication made his anxiety and oppositional behavior worse. 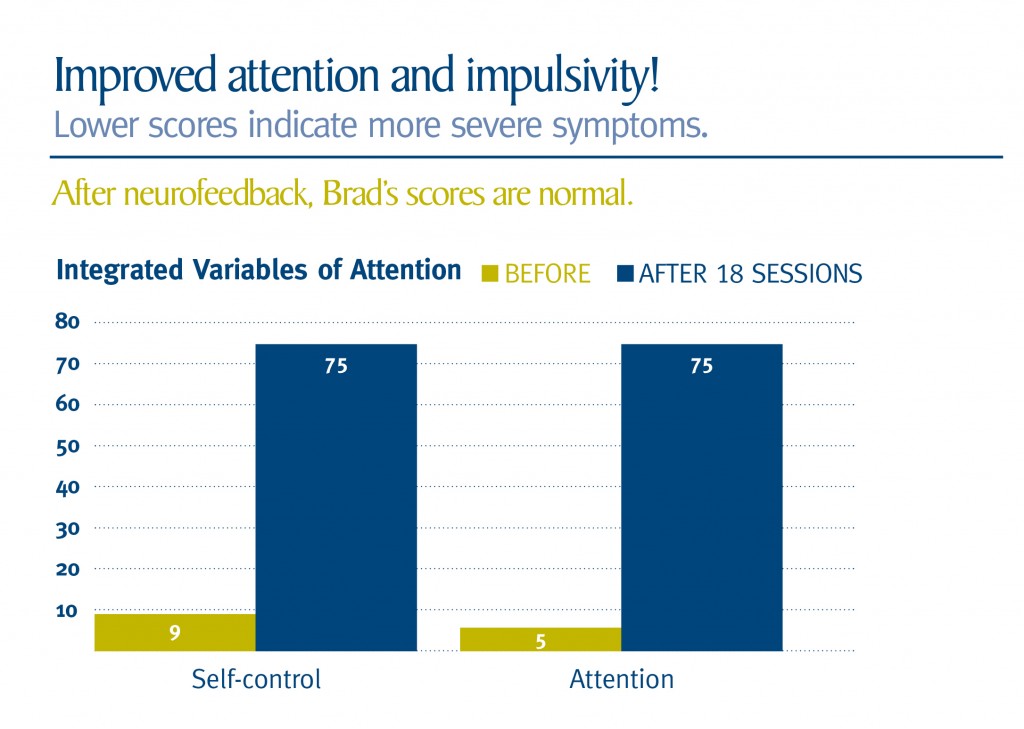 After 9 weeks and 18 sessions of neurofeedback for ADHD treatment, he was calmer, more focused and flexible, and his mood was improved. We measured Brad’s symptoms before and after 18 session of neurofeedback using a well established computerized test. The results showed very significant improvement in both areas. His scores are shown on the right. Brad started his senior year medication free. 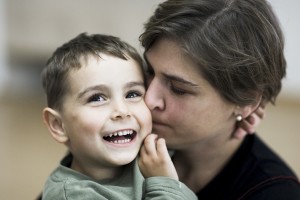 Martha came to the NeuroDevelopment Center for neurofeedback due to her severe ADHD. She was taking stimulant medication, which helped some. But she still had serious symptoms which interfered with her work and family life.

In our testing prior to beginning neurofeedback, Martha showed significant difficulty with attention, hyper-restless behavior, and total ADHD symptoms. On a computerized test of attention and impulsivity called the IVA, 999 people out of 1000 scored better on impulse control.

After ten weeks and 20 sessions of neurofeedback for ADHD treatment, all the tests were repeated. This time she performed better than most. 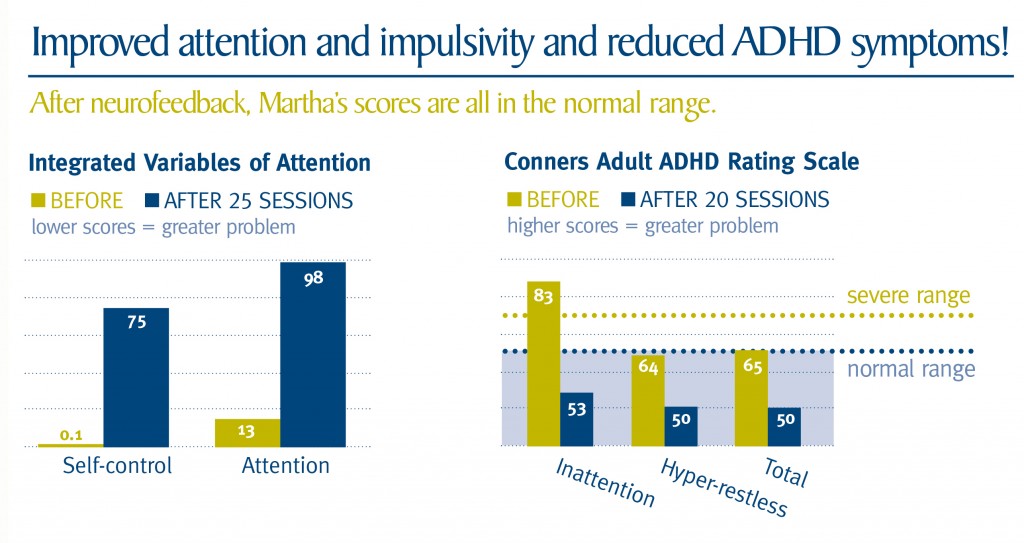 More inspirational Real Stories from our clients with ADHD: 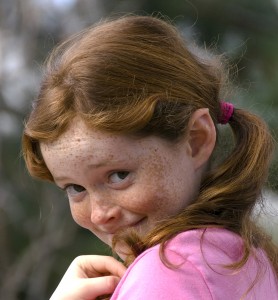 Lee’s Mom described her as sweet and happy, but “slow, completely lost, and clueless.” She had been diagnosed with ADHD. Her symptoms, as reported by her teacher and her parents, were quite severe and her learning at school quite impaired. Lee completed forty neurofeedback sessions. When she was done, her parents and teacher repeated the Conners ADHD symptom rating scale which had been done before she started. Her parents also wanted her IQ test repeated. As the graphs here show, Lee showed huge and very consistent improvements in attention, hyperactivity, and other common symptoms of ADHD. Her IQ increased dramatically as well. She went from the borderline mentally impaired range to the normal range. Still sweet and happy, she was now much better able to learn in school. 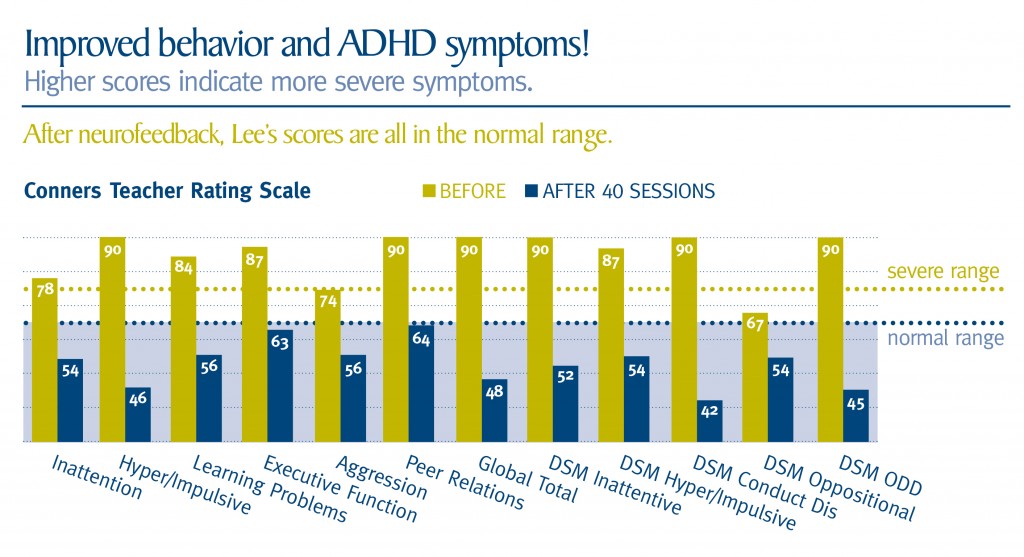 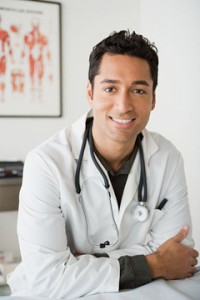 I arrived desperate. The medications for attentional deficit disorder made me more anxious, not more effective. They worsened my reading comprehension and my test taking skills. Four times I had failed Step 1 of the United States Medical Licensing Exam, the exam that students take after completing the first two years of medical school. While my mentors both in the classroom and on the hospital floors reassured me that I knew enough to pass, I kept failing. A trusted friend and nationally recognized neuroscientist recommended neurofeedback, saying he had seen Dr. Hirshberg speak at Brown University and was impressed.

The effects were not immediate. Within 5 sessions, however, I began noticing subtle differences in the way I approached test questions. My ability to remain focused on the question at hand changed for the better. I began to read faster and discriminate more effectively between more and less important information, as presented in the often lengthy test questions. I also noticed a greater ease with which I approached my daily test preparation.Throughout the 6 week therapy, Dr. Hirshberg made adjustments in the treatment protocol based on my personal reports and continually honed the training to maximize my ability to learn, and convey what I had learned, effectively.

Curiously enough, the afternoon I found out by telephone that I had passed the exam, I was at the NeuroDevelopment Center undergoing training. With electrodes attached to my head, I got the good news. Two and a half years of effort had come to an end. The sounds and colors from the Dr. Hirshberg’s training terminals had taught my brain about itself. My effort had paid off, but it had also been sharpened by a very special type of therapy, one that is not yet part of medical curricula. Thanks to the neurodevelopment center I am now free to move ahead in my professional, and personal, development.

As tears streamed down my face, and I tried to verbalize my joy to those in the room, Dr. Hirshberg detached the electrodes: “That will be enough training for today.” 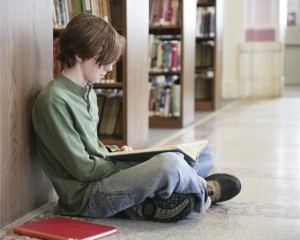 The problem: “Our son was diagnosed with ADD eleven years ago, and since then has been on either Ritalin or Adderal. Although he has willingly taken his medication when it is put out for him, he doesn’t think to take it on his own. I was getting desperate. He is heading off to college next year, and I had visions of him becoming angry, frustrated, and discouraged, as well as missing classes, assignment deadlines, and even meals due to his lack of time awareness.”

The solution: “After 20 neurofeedback sessions, my husband and I see Evan’s improvement first-hand in day to day situations! Evan’s “stick-to-itness” has improved tremendously. He’s actually able to finish tasks he begins without getting side-tracked ten times! He functions on a much more even keel, and his outlook is much more positive. Incidents which would have angered or frustrated him before neurofeedback, now seem to have very little negative effect. His whole personality has “lightened up,” and he is actually able to laugh at himself! In looking at his report card for the last marking period I was truly amazed; all his grades were good, but in two courses he liked the least, he went from a 70 to an 80, and a 75 to a 95! I very rarely feel the need to give him his medication any more, so I feel much more secure about sending him to college this September.” 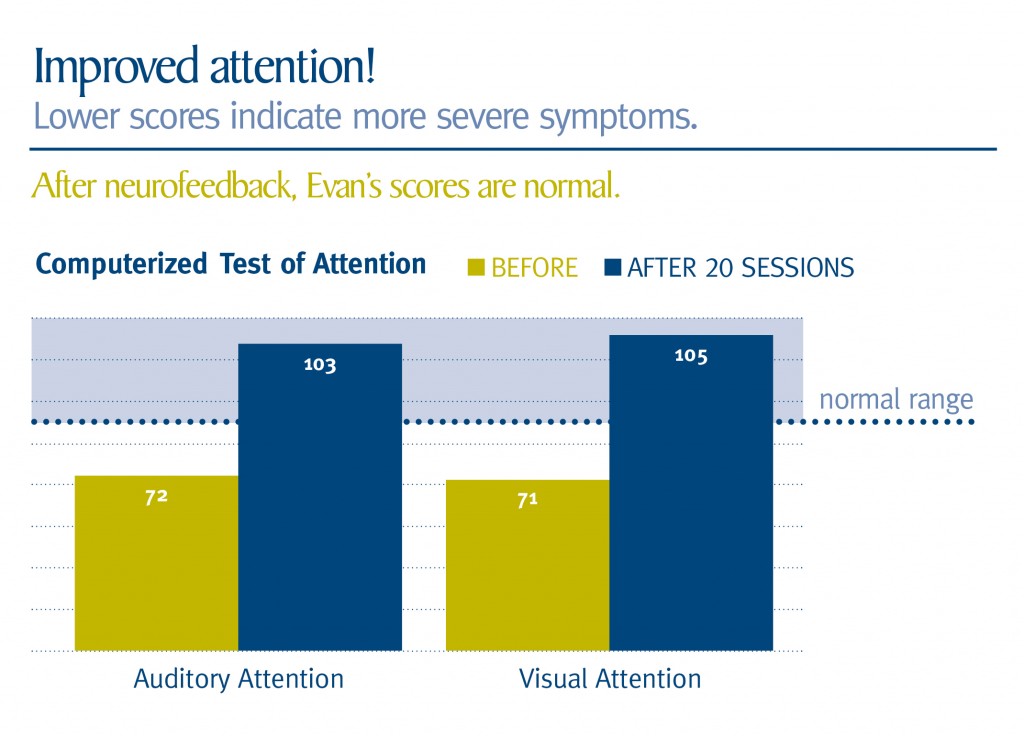 *The names and photos of “Real Story” clients have been changed to preserve their privacy and adhere to HIPPA regulations.