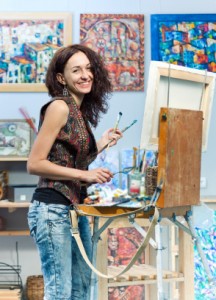 Erin is an artist and art teacher. She was quite well known, with several celebrated shows in New York. She had a terrible fall while bike riding and sustained a serious traumatic brain injury. The injury left her suffering from fatigue with little stamina. She felt “dull, flat, non-inventive”. Her memory was impaired, she had trouble thinking clearly, could not stay organized or plan ahead. Due to these symptoms, she could not work. Could not do her art. Could not teach art.

After ten weeks and 20 sessions of neurofeedback training for brain injury, Erin was much improved. Her memory and planning were much better. She had her creative energy back. She plunged back into her art and teaching.

Two years later she wrote us: “I have been meaning to write and actually will be sending you a catalog of my show that I had in NYC in the fall.  With your help I managed to pull off this huge project….And to think that most of those paintings were done AFTER I worked with you!!!”   With glowing reviews by a world renown artist, her show was a huge success. She sent us the beautiful catalog from the show. It’s one of our prize possessions.

Alex was a college student who suffered three concussions over a period of four months. One concussion is bad enough, but multiple concussions in a short period of time leads to much more severe difficulties. Alex had to drop out of college due to his problems with attention, mood, memory and executive function.

We measured the severity of his symptoms before and after ten weeks and 20 sessions of neurofeedback training for brain injury. As you can see from the graph below, Alex’s testing showed  improvements in mood, ADHD symptoms, and executive function after 10 weeks of neurofeedback training. Alex went back to college the next semester, graduated with honors, and went off to do graduate study in Europe. 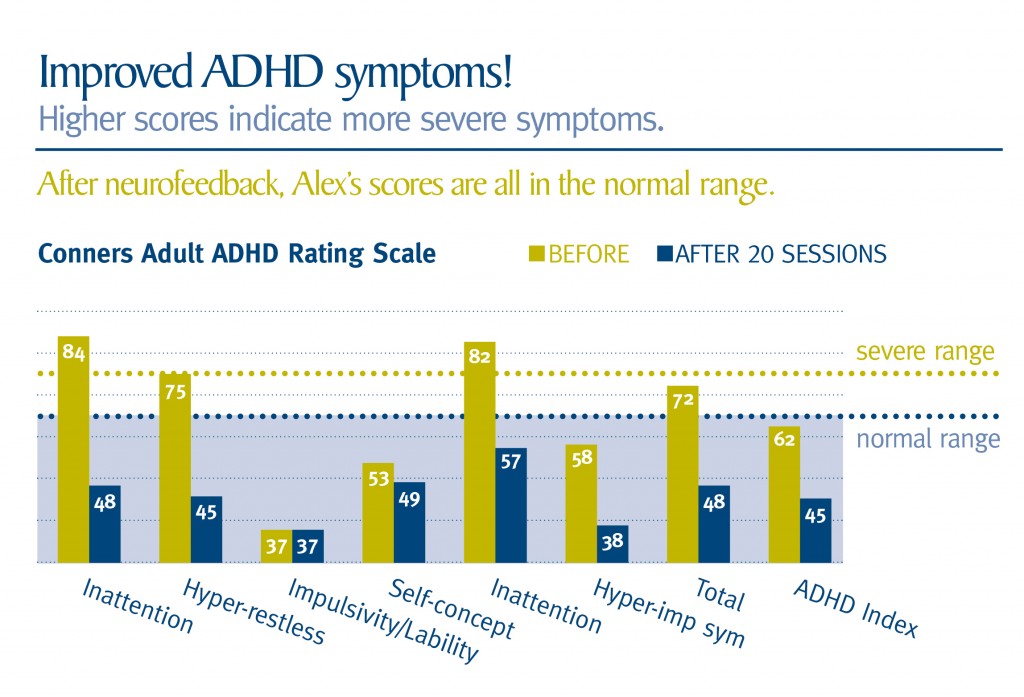 Sam sustained a gunshot wound to his frontal lobe – the part of the brain that is involved with emotional and behavioral self-control and other parts of executive function. His recovery was amazingly good. His language was fine. No attention problems. He was organized and on time. He had a great sense of humor. But he could not stop himself from getting out of control if he got angry.  Sam lost several jobs after telling off his boss.  He had repeated bouts of “road rage” while driving.

Ten weeks of neurofeedback training for brain injury helped a great deal. Sam’s temper cooled considerably, and his self control increased significantly as measured by psychological tests. Sam liked to joke: it wasn’t that the neurofeedback helped. It’s just that “the drivers got better”.