Neurofeedback, also called EEG biofeedback or neurotherapy, is a research proven way to help you improve your brain function through intensive brain training exercises. Although the technology is quite sophisticated, the process is simple, painless, and non-invasive. It is just learning. You learn to alter your brain activity the same way you learn every other skill – through feedback and practice. What is new in neurofeedback is that you are guided by a form of feedback that was previously not available to you – instantaneous information about changes in your brain’s electrical activity. Every half second, your brain activity is compared to your targets for change. You get a signal and “reward” when you meet the goal. No signal or reward when you do not.

In 20 neurofeedback sessions, with feedback every half second, you get 72,000 chances to learn. That’s a lot of repetition and practice. Brain science has shown that repetitive exercise of brain networks reshapes the brain. Neurofeedback allows you to reshape your brain.

Neurofeedback for autism spectrum disorders usually focuses on improving the processing of social and sensory information and on reducing activation of emotional networks. Learn more.

Scientific evidence on neurofeedback for ASD 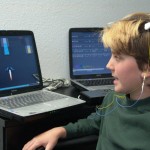 Early studies have provided research support for neurofeedback as a treatment of the symptoms of autism spectrum disorders (ASD) including Autism, Asperger’s Disorder, and Pervasive Developmental Disorder (PDD). As of 2011, nine studies have been completed, showing significant improvements in social, emotional, and behavioral functioning with neurofeedback. Seven studies showed brain change after neurofeedback. Follow-up studies at 12 and 18 months after the neurofeedback training ended have showed that the gains from neurofeedback last after training ends.

Treatment for ASD is expected to be long term. But these studies are showing improvements in a very short time – between 10 and 18 weeks. More research needs to be done, particularly more studies employing random assignment of subjects to a neurofeedback and to a good comparison or control group.

At the NeuroDevelopmentCenter, we believe that the early scientific evidence suggests that neurofeedback should be considered an evidence based treatment option to supplement better studied treatment such as applied behavior analysis and speech and language therapy. Learn more.

Neuroscience is increasingly showing the basis in the brain for autism spectrum disorders. In fact, in a small study we completed with colleagues at the NYU Brain Research Center, qEEG identified subjects with ASD more accurately than the very best behavioral measure. Although more research is necessary, this study suggests that the EEG taps into the basis in the brain for ASD.

Medications just treat the symptoms and do not correct the source of the problem in the brain. At the NeuroDevelopment Center, our approach is different. We measure brain function with a quantitative EEG brain map,  so that you can see the reason for your difficulties. The image below is from the qEEG analysis of one of our clients with autism spectrum disorder. The area in red shows excessive activation in a part the brain’s emotional network. Once we see the source of the problem, we target that area for change through neurofeedback brain training. This allows you to reshape your brain, not just mask your symptoms. Learn more.

Sam’s Dad came to us looking for a new approach to treatment for autism spectrum disorder. His son Sam was a junior in college. Although Sam had coped reasonably well in high school, he just could not handle the complexities of life in college. He became totally isolated and very depressed. He had to drop out of school.

Sam responded well to neurofeedback. In ten weeks, after 20 neurofeedback sessions, his social functioning improved dramatically. This improvement is shown on the Social Responsiveness Scale (SRS). This is a research-proven measure of autism spectrum symptoms. We employed this test before and after every 20 sessions in Sam’s neurofeedback training.

After 20 neruofeedback sessions, all but one of his scores fell in the normal range. He no longer scored in the Asperger range on the Gilliam Asperger Disorder Scale, a well accepted diagnostic instrument. His Dad joked at the time that he was afraid his son had become a bit of a party animal. For the first time in his life, being social was as much of a priority as grades! 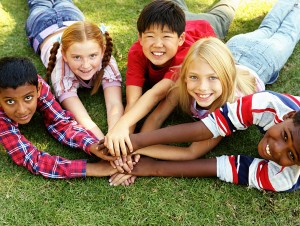 Sally was smart as a whip. But she struggled to understand the social world and to remain calm and in control of herself. She completely avoided playing with other children her age. She was rigid and bossy.

After ten weeks and 20 sessions of neurofeedback training, Sally showed very significant improvements in her social functioning as documented by the Social Responsiveness Scale (SRS), with two of the scale scores shown below. Sally was able to enjoy herself in play with peers for the first time in her life and was much calmer, more flexible, and happier -in school and at home. 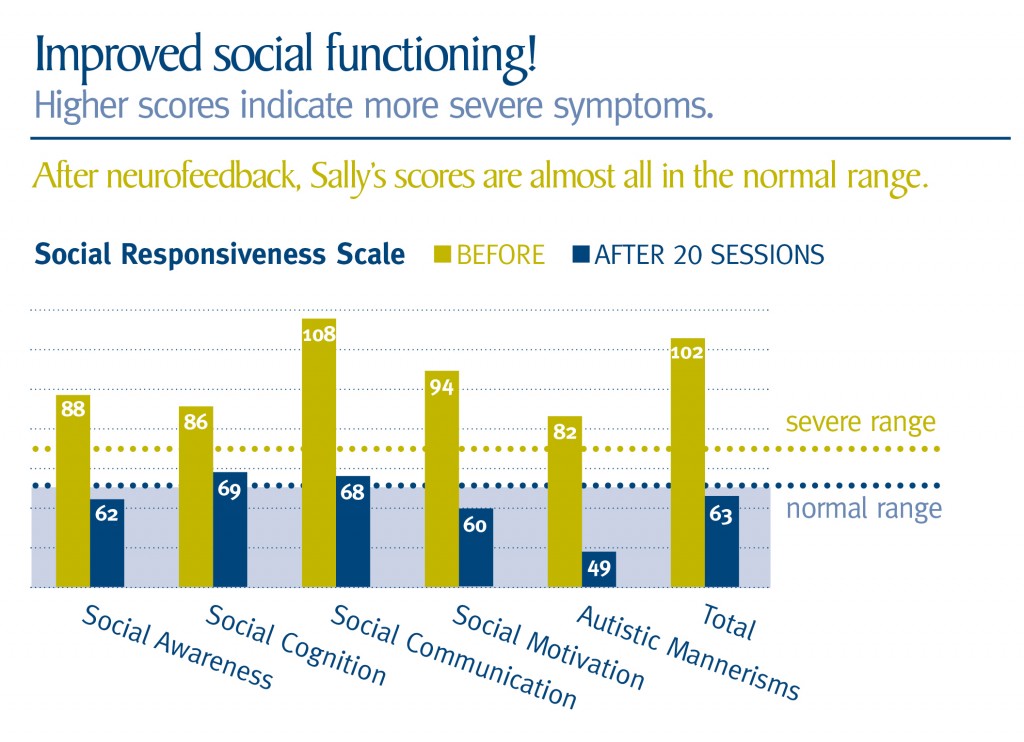 You probably have lots of questions about neurofeedback for ASD. We are glad to answer them all. Let’s sit down together.